Situational Awareness Is Key To Self-Defense

We may be attacked at anytime and anywhere. We do not get to chose the place of conflict or who is engaged. We can only attempt to avoid it and if required win at any cost because..."it is better to be tried by twelve than carried by six." Regardless if you are a man or a woman the attack can come unexpectedly and violently. In the USA, every two minutes a woman is being raped. A 1993 survey revealed that 50% of Canadian women have experienced an incident of sexual assault or physical violence. In Australia, 19% of women aged 18 to 24 experienced an act of violence in the last year. And it is not only women, men may be attacked in almost any situation and for a wide-ranging variety of reasons.  The goal is to avoid conflict, so what can you do to keep from finding yourself in a situation where violence becomes the only answer?

10 Ways  To Reduce The Possibility of Violence or Attack

Most physical trouble begins as a result of saying something rude, offensive, tactless, stupid, or hurtful. This is one of the hardest lessons to learn and control. Think before you speak, and you should be able to avoid most conflicts.

LEAVE THE TROUBLE BEHIND

If a fight breaks out where you are - leave immediately. Go before all the brawlers start swinging chairs, bottles, glasses and punches. A "free for all" usually starts with just two protagonists, but unfortunately may lead to innocent bystanders getting hit. So, leave all the fools to bash each other and then you will not get hit.

KEEP YOUR NOSE OUT OF IT

NEVER attempt to mediate an argument between a man and a woman. If you do, it is probable both will cease arguing or fighting with each other and turn on you - the common enemy. The only time you should intervene is if you fear for the woman's safety. Then you should call the police if possible, and only step into the middle if physical violence is imminent and police will not arrive in time.

Understand that many people these days have a cocktail of drugs and booze in their veins. It makes them argumentative, aggressive and "Mike Tyson-esque." Make a physical effort to walk around or away from people who are "off the planet." Do not look like a victim, but do not appear threatening either. Avoid direct eye contact, but keep them in your peripheral vision so you can monitor their activity; even a casual glance at them can set them off.

DON'T BE A HERO

The cemeteries are full of dead heroes. Don't add to their number. There is no shame in avoiding a fight. Run if you can; especially, if the odds or numbers are against you. In fact, running away is smart.

Negotiation is a far higher art form than physical confrontation. Do anything reasonable to avoid a fight. NOTHING good ever comes out of conflict. Talking your way out is a better option even if you have to swallow a little pride.  Those who know you will not think any less of you for avoiding a confrontation.

LISTEN TO YOUR GUT

Trust your instincts. If you think a situation might be dangerous then it probably is. That little guardian angel should be trusted rather than ignored. Learn to overcome the social indoctrination causing you to continue down a path you feel is going to lead to a dangerous situation. It is better to have a few think you are silly rather than many read about you in the morning paper.

Drive in a courteous manner. You do not appreciate rude hand signs, and neither does anyone else.  We are all human and make mistakes. Remember - eventually you have to stop, even if it is to refuel. Psycho cases might follow you for many miles "just to teach you a lesson" - all because you made yourself a target. Even if it is the other person's fault, be polite and move on with your day.

Drinking excessive amounts of alcohol, taking mind altering drugs, and leaving ANY food or drink unattended is asking for trouble.  Never leave any drink or food where someone might tamper with it. Always when possible have a lid on your drinks and never leave it even with a friend.  Some "friends" want to be more than just friends.

NEVER walk alone at night or at any time in isolated areas. Predators love these locations. Avoid them. If you must go by yourself, take your smart phone to use to call for help if needed, but do not use it as you travel,  so it does not distract you from your surroundings. Do not wear headsets, so you can hear. Keep your eyes up and alert and avoid walking close to alley entrances or parked cars as someone could grab you as you go by. 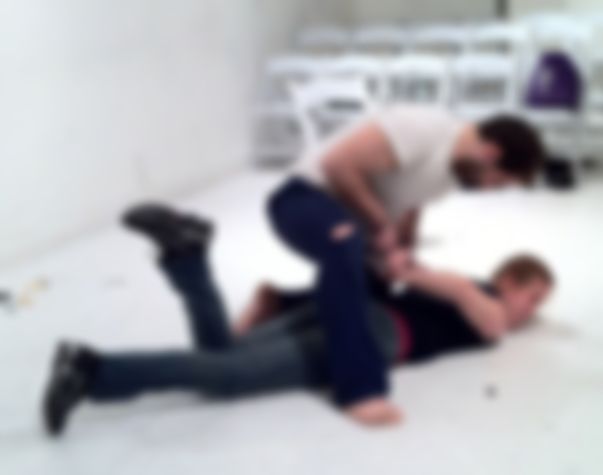 In addition to every day events which may lead to a violent confrontation we also have to worry about sexual assaults as well; especially women.  These are sometimes hard to see coming, but many can be avoided or stopped with a few simple common sense steps.

IT'S OK TO SAY NO

Many sexual acts are committed by people who the victims knew - or, at least, thought they knew! You want to be friendly and polite by all means, but stay vigilant for tell-tale signs of "strange" behavior. Don't be afraid to say "No" to hugs, being alone, or touches if they make you uncomfortable. Always make your intentions clear and Do NOT flirt. Any indication you are interested can lead the predator to become much more confident and bolder.  This can in-turn lead to aggressive behavior and possibly rape. Be firm about any unwanted attention.

Men you need to understand if you allow yourself to be placed in a "compromising" position with a woman, particularly one who is "under-age," then you are placing yourself in a situation which can lead to untrue accusations. It will be very hard for you to overcome these accusations. Though, 1 out of 100 times everything will be fine, it only takes once to ruin your life.

Due to this, do NOT:

BE MODEST
Ladies, please do not get offended by this statement. Yes, you should be able to wear what you want without being sexually harassed; however, remember if you look easy then the predators will attempt to prey on you. It is not fair, but it is reality. So to reduce the possibility of attracting a predator, do not, or at a minimum, reduce the amount of revealing clothing worn. Showing more will ensure that you attract plenty of attention, including attention from those people with evil intent. Wearing revealing clothing is not the only way to look beautiful. Learn to attract a man rather than an immature boy or a possibly deadly predator.

Sexual assault against anyone is a horrible thing. It is something that leaves physical and emotional marks for years, so it is wise to take action to avoid the possibility of being the victim of one.  Though you did not cause it; unfortunately it will affect you for the rest of your life, and you don't want to live with the aftermath of such an attack. Be aware, Be safe, and if it does happen, don't be afraid to tell.

If you must engage, engage to win. You must always believe you can win.  Use every and any means necessary to terminate the threat.

EVERYTHING IS A WEAPON

Recognize objects in every room of your home that could be used as makeshift weapons. When in a restaurant identify exits and any object which can hurt you or someone else. A magazine can be rolled up and use to help defend against a knife attack or you can use the end to strike the throat of an attacker.  Chairs, glasses, forks, knives, plates, and even food can be used to stop, hurt, or slow an attacker.  Stay alert and mentally track objects to use if something were to suddenly go down.

BE PREPARED TO CROSS THE LINE

In the event of the worst outcome, and you find yourself in a situation of rape or physical attack, prepare yourself mentally, now, to cross the line of socially acceptable actions. If you want to survive, sometimes you have to do dark unthinkable things. Do not be afraid to do so if the situation calls for it.  Use your fingers and fingernails to gouge your attacker's eyes out. Use any object near by to strike the attacker. Crush your attacker's throat. Bite any flesh you can get your teeth into. It is win and live or lose and die. It is not a tournament. It is not the octagon. It is life or death, so their are no rules and no unacceptable tactics.

Ladies if you can't bring yourself to do this kind of harm or if you feel it may further endanger you then at least scratch your attacker with your fingernails. It marks him for identification and you will have DNA under your nails.

Don't make the fatal mistake of thinking that ANYBODY fights "fair" any more. Those days are over - they have been since the John Wayne era! You must expect multiple attackers, weapons, possibly both, so you must be prepared to cross the line to survive. When all else fails, your back is to the wall and there is absolutely no other alternative left remember... "it is better to be tried by twelve than carried by six."
Remember the opening words - "Situational Awareness is the key to self-defense." Increase your awareness, mind your manners, know your surroundings, and you will certainly improve your safety. However, if you must fight, fight to win at all cost.